Abdul Karim: The Man Whose History was Erased for being Loved by Queen Victoria.

Abdul Karim: The Man Whose History was Erased for being Loved by Queen Victoria.

Abdul Karim was the Last Man to see Queen Victoria’s Body before her casket was closed.

The relationship between Queen Victoria and her handsome, young Indian attendant Abdul Karim was deemed so controversial and scandalous by her family members that, upon the monarch’s death in 1901, they scrubbed his existence from royal history. According to The Telegraph, Victoria’s son Edward immediately demanded that any letters between the two found on the royal premises be burned. The family evicted Karim from the home the queen had given him, and deported him back to India. Victoria’s daughter Beatrice erased all reference to Karim in the Queen’s journals—a painstaking endeavor given Victoria’s decade-plus relationship with Karim, whom she considered her closest confidante. The royal family’s eradication of Karim was so thorough that a full 100 years would pass before an eagle-eyed journalist noticed a strange clue left in Victoria’s summer home—and her consequential investigation led to the discovery of Victoria’s relationship with Karim. 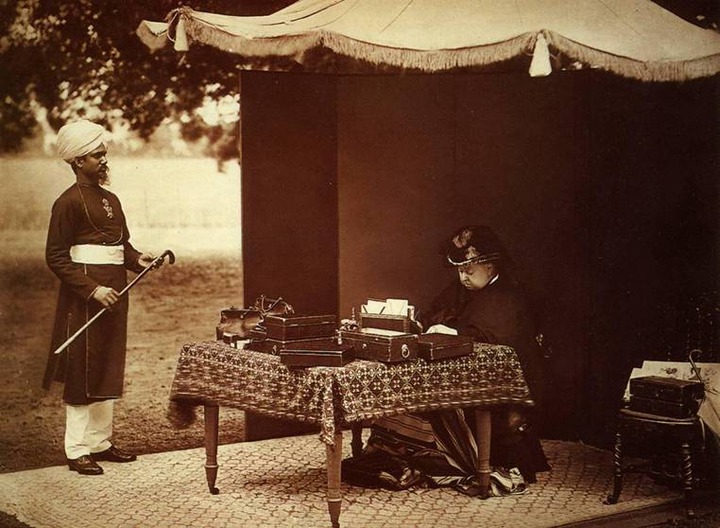 But why was the relationship so controversial—beyond the interclass curiosity of the Queen of England confiding in a servant—that it warranted full censure?

According to historians, Victoria’s family and staff members exhibited prejudice of the racial and social variety, which compounded with jealousy as Victoria became closer with Karim and afforded him privileges including traveling with her through Europe; titles; honors; prime seats at operas and banquets; a private carriage; and personal gifts. The queen entertained Karim’s family members, helped his father get a pension, and enlisted local press to write about him. Victoria also commissioned multiple portraits of Karim—which would be the key to discovering the depth of their relationship (more on that later).

Karim was the only servant to ascend to the queen’s inner circle since the death of her Scottish confidante John Brown, who helped fill a personal void in Victoria’s life after her beloved husband, Albert, died. (Dench also starred as Victoria in the movie adaptation of that tongue-wagging palace relationship, Mrs. Brown—named for the nickname the queen’s staffers gave her behind her back.) Though court members did not approve of Brown’s relationship with the queen, they considered Karim’s friendship far worse.

According to historian Carolly Erickson in Her Little Majesty, “For a dark-skinned Indian to be put very nearly on a level with the queen’s white servants was all but intolerable, for him to eat at the same table with them, to share in their daily lives was viewed as an outrage.”

Did Victoria catch wind of the racist animosity swirling in her palace? She sure did. Her assistant private secretary Fritz Ponsonby ended one letter, which protested Karim’s favored standing, by outlining Victoria’s assessment of the inter-palace resentment: “the Queen says it is ‘race prejudice’ and that we are jealous of the poor Munshi.”

Ahead, more burning questions about Victoria and Karim answered.

How did they meet?

According to Shrabani Basu, the journalist who uncovered this friendship after a 2003 visit to the Queen’s summer home and wrote about it in her book Victoria & Abdul: The True Story of the Queen’s Closest Confidant, the Queen had expressed interest in the Indian territories ahead of her Golden Jubilee in 1887, and specifically requested Indian staff members help serve at a banquet for heads of state. As such, Karim, the son of a hospital assistant living in the North Indian city of Agra, was one of two servants selected and presented to Victoria as “a gift from India” on the occasion of her 50th year on the throne. Karim, who joined Victoria four years after the death of her beloved Brown, quickly set to work for the nearly 80-year-old monarch. Victoria wrote that her first impression of the handsome Karim was that he was “tall with a fine serious countenance.”

What did they bond over?

At Victoria’s summer home on the Isle of Wight, shortly after the Golden Jubilee, Karim impressed the monarch by cooking her chicken curry with dal and pilau. According to Victoria biographer A.N. Wilson, the queen enjoyed the dish so much that she incorporated it into her regular meal rotation.

As she became more interested in the culture, she asked Karim to teach her Urdu—then known as Hindustani.

“Am learning a few words of Hindustani to speak to my servants,” Victoria wrote in her diaries. “It is a great interest to me, for both the language and the people.” In order to better communicate with Karim, she also insisted that he double down on English lessons until the two were able to communicate directly with each other. Though he was hired as a servant, Victoria quickly promoted him to “Munshi and Indian Clerk to the Queen Empress” at a monthly salary of 12 pounds. He was later promoted to a highly decorated secretary.

As for what the Queen saw in Karim, beyond his provenance, Basu told The Telegraph, “He spoke to her as a human being and not as the Queen. Everyone else kept their distance from her, even her own children, and this young Indian came with an innocence about him. He told her about India, his family and was there to listen when she complained about her own family.”

“I am so very fond of him,” Victoria wrote. “He is so good and gentle and understanding . . . and is a real comfort to me.”

How close were they?

“In letters to him over the years between his arrival in the U.K. and her death in 1901, the queen signed letters to him as ‘your loving mother’ and ‘your closest friend,’” Basu told the BBC in 2011. “On some occasions, she even signed off her letters with a flurry of kisses—a highly unusual thing to do at that time. It was unquestionably a passionate relationship—a relationship which I think operated on many different layers in addition to the mother-and-son ties between a young Indian man and a woman who at the time was over 60 years old.”

Though Victoria and Karim did spend a night alone at Glassat Shiel—the remote cottage in Scotland the queen had shared with John Brown—Basu does not think that the two, separated by decades in age, had a physical relationship.

“When Prince Albert died, Victoria famously said that he was her husband, close friend, father, and mother,” Basu wrote. “I think it’s likely that Abdul Karim fulfilled a similar role.”

Karim’s descendants, having read the diary, similarly believe that the relationship was platonic and maternal at best.

In 2010, Abdul’s great-grandson Javed Mahmood told The Telegraph, that they shared “a mother and son relationship. She became an Indophile in part because of her affection for him. But the prejudice of her family percolated down to Victoria’s staff.”

What kind of special privileges did he get?

He was allowed to carry a sword and wear medals in court and bring family members from India to England. “Mr. Karim’s father even got away with being the first person to smoke a hookah [water-pipe] in Windsor Castle, despite the queen’s aversion to smoking,” Basu has said.

Did he ever marry?

Karim was married and Victoria treated his wife just as favorably. After Karim expressed his desire to return to Agra to be with his wife, Victoria invited Karim’s wife to join him in England. She gave the couple homes on all of the main royal estates in the U.K. and land in India. The monarch, who had nine children of her own, even offered Karim conception advice, advising him, according to The Telegraph and his wife, “She should be careful at the particular time every month not to tire herself.”

How did they say goodbye?

Victoria requested that Karim be among the principal mourners—a small group of her closest friends and family members—at her Windsor Castle funeral. And Victoria’s son Edward complied with this request, incorporating Karim in the funeral procession and allowing him to be the last person to view Victoria’s body before her casket was closed.

According to The Smithsonian though, “Edward VII sent guards into the cottage Karim shared with his wife, seizing all letters from the queen and burning them on the spot. They instructed Karim to return to India immediately, without fanfare or farewell.”

How was his story discovered?

While touring Victoria’s Isle of Wight summer home in 2003, Shrabani Basu noticed several paintings and a bust of an Indian servant called Abdul Karim that stood out to her.

“He didn’t look a servant,” Basu told The Telegraph in 2017. “He was painted to look like a nobleman. He was holding a book, looking sideways. Something that about that expression struck me, and when I moved along, I saw another portrait of him looking rather gentle. It was very unusual.”

“No one had seen them up to that point,” explains Basu. “The blotting paper fell out of these journals which hadn’t been opened for 100 years—presumably because all Queen Victoria’s biographers had been western and couldn’t follow Urdu.”

She read through 13 volumes of the Queen writing about Hindustani lessons in Balmoral, visiting Abdul when he was ill, and visits to take tea with his wife—who she had granted permission to come from India to join him—and see their cat’s new kittens. Her passion for India was obvious, from her desperate wish to eat a mango and her view of the Karims as her equals. It showed a completely different side of the Queen’s life that had been previously recorded.

Miraculously, a surviving member of Karim’s family contacted Basu and directed her to a relative who had held onto Karim’s existing diaries, which she incorporated into her book Victoria & Abdul: The True Story of the Queen’s Closest Confidant—the basis for the Stephen Frears drama starring Judi Dench and Ali Fazal.

One early journal entry, per The Telegraph:

“This is the journal of my life at the court of Queen Victoria from the Golden Jubilee of 1887 to the Diamond Jubilee of 1897,” wrote Karim. “I’ve been but a sojourner in a strange land and among a strange people. . . . While I record my life I cannot but call to mind the many honours which have fallen to my lot and all through the great goodness of Her Majesty. I pray to the Almighty for the richest blessings to be showered down on our good Queen Empress.”

Things people get wrong about true definition of love

Nigerian Youth: Living In A Time of Magic and Taking Advantage of It – Yemi Osinbajo

I want to urge all of us, especially the young people... read more

News In A Flash – Anita, Remarries

Anita Ebodaghe, the estranged wife of the founder of Christ Embassy... read more

HOW I STARTED SINGING WITH MY DAD, FELA, @ AGE 8 – AFROBEAT STAR, SEUN KUTI

Seun Kuti looks every inch like his late dad, the Afrobeat... read more

The Central Bank of Nigeria (CBN) has asked bank customers not... read more

“I Am Now a Christian” – Kanye West

American rapper, Kanye West, has declared that he is now a... read more

By Patricia Redsicker Do you use images to boost engagement? Are you looking for... read more

The Senate on Wednesday, began the confirmation process of both Mohammad... read more